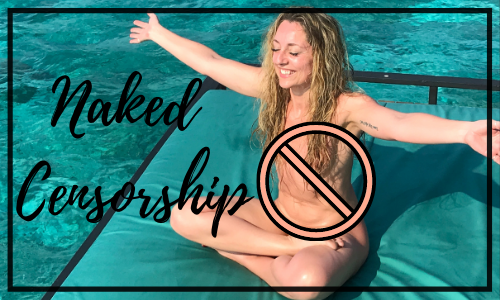 Social media platforms apply very strict rules on nudity. In the media in general, the female body still tends to be sexualised. A female nipple is seen as obscene, whereas a male one is considered a body part, without any sexual associations to it. But when you really think about it, what is the difference between the two? Exactly, there is none. Instead of seeing a naked body, the female one is being judged and sexualised.

Posting a naked picture of yourself from behind without covering up the booty with a text or a small element (like a star for example) is being considered as pornographic content.

In August 2020 one black plus-size model opened up a conversation regarding Instagrams policy on nudity. She is a firm supporter of body positivity and got taken down for posting a picture holding her breast as it was considered as pornographic squeezing which Instagram later admitted to being wrong. In the end, Instagram and its parent company Facebook decided to update their policy and to treat all body types the same without discriminating against plus-size bodies. 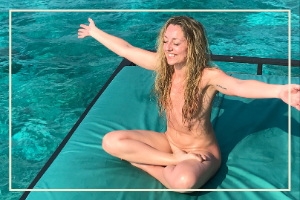 As you can imagine, being a Naked Yoga Teacher, I have had my fair share of issues with these policies as well. I have had many complaints about and warnings regarding nudity in my pictures (see my example on the left). In September 2019 my account was even taken down by Instagram. I had to send emails from different accounts over and over again and it took me a month in total to claim it back. Running a business with a focus on body positivity, this is really harmful and difficult.

It is time for a change in how our society looks at the female body and to normalise nudity. A naked body is not an invitation for sex. It is taking off the masks you wear in your everyday life and making yourself vulnerable. Being nude means showing who you really are, no more hiding behind clothes. Let us celebrate the beauty of our bodies together and keep fighting the sexualisation and judgement of them!