How the Media creates Body Issues 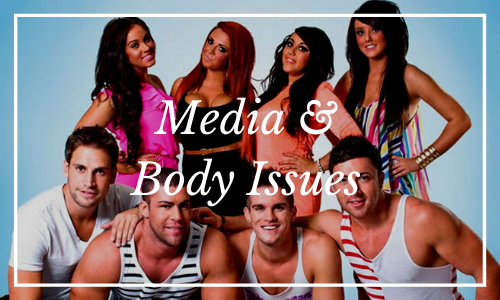 Each second our brain receives millions of single impressions. After receiving 40 of them consciously, the rest is being processed unconsciously, as it would otherwise be completely overwhelmed. Being stored in the unconscious mind, this information suddenly comes up when we need it. These are the moments where you wonder how you could possibly know a certain thing. Scientists estimate that we are only conscious of 0,1% of our brain activity, meaning that over 99% happens on an unconscious level.

Advertisement is based around this as well. Ads are targetting our unconscious mind and the more often we see something, the more we believe we need it. Keeping this in mind, it is only logical that we are affected by the appearance of seemingly perfect human beings on TV, who receive professional make-up and styling. With almost every visual ad being photoshopped nowadays and filters available to everyone on social media platforms, we have absolutely unrealistic and unachievable beauty standards. Not even the most glamorous models and actresses look this way naturally and many stars resort to plastic surgery.

Studies have found that reality TV shows like The Bachelor and especially Love Island in which the contestants pose in swimwear half of the time are really harmful to girls and young women’s self-esteem. After watching such programs, 40% of young women feel self-conscious about their bodies. Resulting directly from watching such programs, 30% have considered going on a diet and 10% have thought about getting lip fillers. Other procedures considered were breast implants and botox.

Instead of filling an evening with light entertainment, such shows are damaging today’s youth. And this does not just apply to people watching such reality TV series, but also to the people participating in them. Being in the spotlight like this and having strangers judge your appearance is hard to take and can lead to mental health issues or to people going ahead with plastic surgery.

Former Geordie Shore star Charlotte Crosby recently got slayed and humiliated on a program analysing famous people’s plastic surgery procedures. No matter what you do, it seems there is nothing one can do to please the public eye and the media as such. There is hope though as in the case of Charlotte she got a lot of support from her fans and even people who are not Geordie Shore addicts but are against public humiliation like she experienced. In fact, the support was so big, she posted a video on social media thanking everyone for their support and tearing up as she was so overwhelmed. This means, that we can have a huge impact if we show our individual as well as group support. The channel which produced the episode about Charlotte Crosby even stopped streaming it after receiving many complaints. We can see an overall trend of viewers preferring authenticity and vulnerability more and more over scripted reality TV.

If you are unsure where to start, join people from all over the globe and sign up for my online “live” classes here.