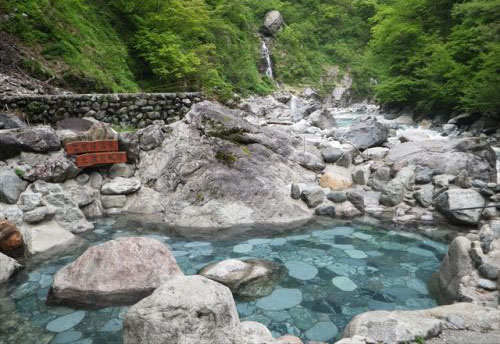 A very pleasurable activity that’s usually enjoyed naked is hot baths. Popular with different cultures, hot baths have been taken by people of all walks of life since ancient times, thanks to their vast health benefits. And interestingly, they are one of the very few common activities that people usually take part in publicly naked – which has something to say about the fact that being nude is totally natural, and shouldn’t be associated with sexual connotations. In fact, from Finland to Japan, whole families can often be found bathing together.

Today, let’s explore Onsens, the Japanese hot springs, and the whole culture and spirituality that has developed around them.

Because Japan is a volcanically active country, it has several thousand hot springs, formed from water heated thanks to geothermal energy. These so-called onsens are so popular there, that they have become an important part of Japanese culture. The hot springs can be either indoor or outdoor baths. Perks of soaking in an outdoor pond, or rotenburo, is that you usually also benefit from a breathtaking view and you are surrounded by nature – while indoor baths are rather sought after because of their architecture.

In Japanese culture, Onsens are firmly connected to spirituality. Indeed, water plays a very important role in Shinto, one of the main nipponic religions. This stems from very ancient legends, where Japanese deities would take baths to purify themselves. Numerous goddesses and gods also directly originate from water, tears or even wet pieces of fabric.

For instance, water is key to one of the main Shinto purification rites, the temizu. This act consists of thoroughly washing your hands and mouth with a sacred ladle in a basin before entering sacred Shinto temples. A similar ladle is used in Onsens, for people to cool their body with running water.

Onsens have a variety of health benefits.

First, these naturally hot waters have high concentrations of dissolved minerals, drawn from the rocks around them. Onsens are very rich in sodium – which is why, when you get out of them, your skin is covered in a white dust. Don’t worry, it washes away with a bit of non-thermal water. This sodium is claimed to moisturise your skin, fight against skin diseases, and even has anti-ageing effects. Onsens also have a high concentration of calcium and magnesium. Because these minerals are able to easily penetrate into the body, natural hot springs ease joint and muscle pain.

Then, due to the heat of the baths, other benefits include improved blood circulation and an increase in metabolism. Indeed, to qualify as an onsen, the hot spring needs to be at least 25°C, but some of them actually almost reach 100°C! That’s almost boiling temperature!!

Finally, and probably most obviously, onsens are extremely beneficial since they allow for a deep relaxation of the body and the mind. This is mainly due to the buoyancy effect: when entering into a pool of water, even if not an onsen, the body feels lighter, which allows muscles to loosen, and ultimately leads to a profound state of relaxation.

The nakedness side of Onsens

Onsens are enjoyed in the nude – which is a natural state, and doesn’t seem to bother anyone who decides to bathe in them. This is how bathing is traditionally done in Japan, and not only there. In fact, most if not all hot springs worldwide have similar rules, at least in a portion of their facilities. Think for instance of the hot springs in Northern Europe, such as the ones in Iceland.

To me, being able to enjoy onsens naked is probably the best part of it. It allows you to free your mind from any negative thought you might have about your body. The simple fact of having individuals bathing together in the bare is in itself very liberating, particularly for Westerners. In fact, being exposed to other naked people in a completely natural way, helps you realise that there are different types of bodies out there, and that all of these bodies are fine. A good mental exercise to learn to accept your own body, and not pass judgment on others.

Did you ever think there was so much meaning behind the simple act of taking a hot bath?